Questions? Email us at apply@dharmadrumretreat.org 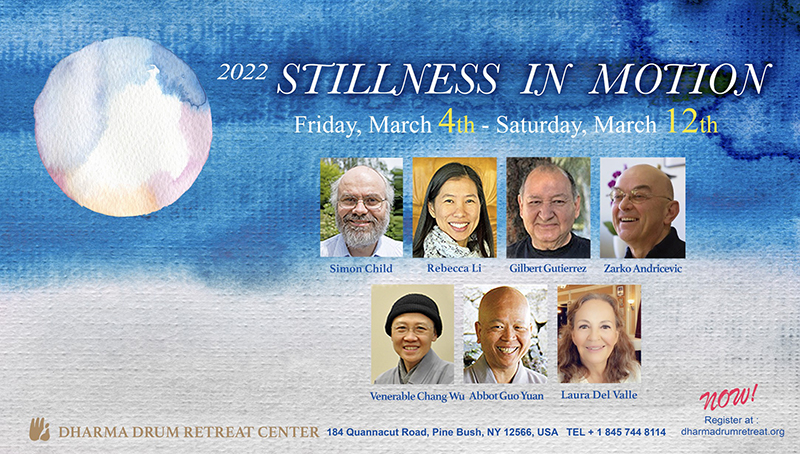 In this online event, learn to integrate meditation into your daily life. Join seven experienced Chan teachers from across the United States and Europe for an in-depth exploration of Zen practice and study. Guided by the late Master Sheng Yen’s practical and inspiring text, 108 Adages of Wisdom, we will learn how his teachings can inform, and deepen our practice, and contribute to the world’s healing that is in great need today.

Through daily dharma talks, daily emails, group discussion, and meditation, we will discover how we can gladden our hearts and those whose spirits are deeply saddened.

When you submit your application, select one of the sliding scale rates below. No one will be turned away for lack of funds. Scholarships are available. Please email apply@dharmadrumretreat.org for more information.

When meditating, please respect this virtual practice as if you were practicing in the Chan Hall. Allow enough space in the comfort of your own home for seated meditation. Let your housemates know that you should not be disturbed at that time. During the rest of the day, hold on to your practice with relaxation and clear awareness.

For sitting meditation, floor cushions or a meditation bench would be best if you have them. Although a sturdy, comfortable chair where the thighs can be level with the floor is acceptable as well.

Venerable Guo Yuan is a Buddhist monk trained in Chan Buddhism, ordained in 1987. He studied Theravada Buddhism for a year in Thailand in 1991. For over twenty years, he accompanied Master Sheng Yen and served as translator in Chan meditation retreats. Fluent in Mandarin, Vietnamese, and English, he now leads Chan retreats in many countries around the world. He is currently the abbot of DDRC. read more

Zarko Andricevic, is founder of Dharmaloka Chan Buddhist Community and Chan Retreat Centre in Croatia. Zarko first encountered Buddhism 1975 and has been a martial arts and yoga teacher since the 1970s. In the mid-80s he started the first Buddhist study and meditation group in Croatia. In 1996 he meet Chan Master Sheng Yen and become one of his students. Zarko received Dharma transmission from Master Sheng Yen in June 2001. Since then he is teaching and leading Chan retreats in Europe, USA, Canada, Taiwan and Australia. He currently lives and teaches at Chan Retreat Center in Croatia.

Laura began practicing with Rinzai Zen Master, Ejo Takata in 1970 in Mexico City.
In 1981 she founded Mar de Jade, (MdJ) an oceanfront retreat center, near Puerto Vallarta, Mexico，and ran a free medical clinic for 28 years.
In 1992 Laura attended her first Chan retreat with Venerable Sheng Yen. The strength, faith and clarity cultivated in Chan practice has been crucial to better deal with the hardships of the rural poor and the rural rich in Mexico.

Gilbert Gutierrez has over thirty-nine years of meditation experience, which includes his study of various martial arts as well as Chi Gong. In 2002, he received Dharma Transmission from Chan Master Sheng Yen. He is the founder of the Riverside Chan Meditation Group. He conducts retreats and lectures throughout North America. Gilbert teaches in a classical Chan style which inspires his students to investigate Chan through diligent practice. read more

Venerable Chang Wu is the Abbess of Dharma Drum Vancouver Centre. She teaches classes in Buddhist philosophy and meditation, and leads intensive meditation retreats in Canada and the USA, as well as England, Luxemburg, Mexico and Taiwan. She organizes and participates in scholarly conferences and interfaith dialogue around the world. You can read more and listen to her Dharma talks here.