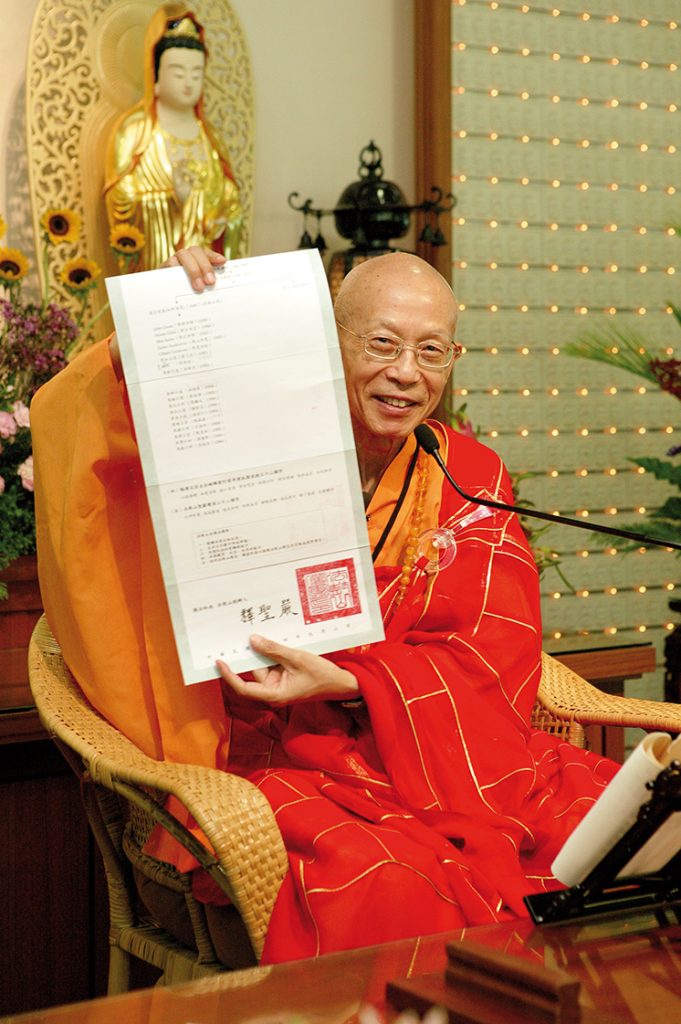 “Kindness and compassion have no enemies;
wisdom engenders no vexations.”

For over thirty years, Chan Master Sheng Yen (Shifu) (1930-2009) devoted himself tirelessly to reviving the tradition of rigorous education for monks and nuns, establishing monasteries and centers of learning; teaching and leading Chan retreats worldwide; interfaith outreach, world peace, youth development, and gender equality. Shifu also emphasized protecting the four environments we inhabit – the spiritual/mental, the social, the living, and the natural.

Shifu taught in a concise, direct and practical manner, with an approach to understanding that people can easily relate to and apply in their daily lives. With disciples and Dharma heirs worldwide, Shifu has planted the seeds for the continued cultivation of Chan in the world today and the future, for the benefit of all who wish to learn and practice this tradition.

Shifu was born in 1930 to a farming family in a village near Shanghai, China. He entered Guang Jiao Monastery with a fourth grade education at age thirteen. As Novice Changjin, he carried out the traditional duties required of monks in China’s Buddhist monasteries at that time. “The local monastery I entered, like most others in China, was called a Chan temple. But, in fact the theory and practice of Chan was almost never discussed there. As young monks, most of us did not have any clear idea of what Chan practice really was. Our training simply consisted of the rigorous discipline prescribed for monks – everyday activities such as washing clothes, working in the fields, cooking and performing daily services. Chinese Buddhism did not provide a systematic education for monks. A monk’s training was usually completed gradually and imperceptibly through the experience of everyday life.”

At age sixteen, because of Communist opposition in the area, he was transferred from the countryside to Da Sheng Monastery in Shanghai with his fellow monks. Here Changjin heard of a seminary where young monks could acquire a Buddhist education, the Buddhist Academy at Jing An Monastery. He ran away from Da Sheng (a decision later approved by his master) to study at the academy. There he was inspired by the teachings of Chan Masters Xuyun (Hsu-yun, Empty Cloud) and Taixu (Tai-hsu) on their visits to Shanghai. The seminary was founded by a student of Master Taixu, one of the great revivers of modern Chinese Buddhism. Taixu himself was much influenced by Great Master Ouyi (1599-1655). The seminary also emphasized physical exercise with instruction in Taiji (tai chi) and in Shaolin boxing from a teacher from Shaolin Monastery.

In 1949, China was in chaos. After much deliberation, Changjin changed his name to Zhang Caiwei and took refuge in the army and left for Taiwan. Yet as a soldier, Zhang Caiwei never for a day forgot that he had been a monk; he never wavered in his conviction that he would once again take up his monastic robes and return to the path to enlightenment.

In the army, the young Zhang Caiwei closely observed life in the lay world and wondered about the origins of life. Eventually, his mind was totally immersed in a great ball of doubt. Then chance brought Zhang to meet Master Lingyuan, a lineage disciple of Master Xuyun. That night, under Master Lingyuan’s guidance, Zhang Caiwei experienced a powerful epiphany. A strong feeling of release swept over his whole being. Describing the experience, Master Sheng Yen says: “It was as if my life suddenly exploded out of the tin can in which I had imprisoned it.”

In 1960 Zhang Caiwei re-entered monastic life under Master Dongchu at the Buddhist Culture Center in Peitou, Taipei, taking the Dharma name Sheng Yen. The Ven. Master Dongchu was a disciple of Master Taixu. “There was a certain master, Dongchu, whom I sensed to be an extraordinary individual. He did not lecture, nor did he give people instruction in practice. Seeking neither fame nor followers, he was widely known and respected. His speech was unusual and had a startling effect on people. […] He constantly harassed me. For example, after telling me to move my things into one room, he would later tell me to move to another room. Then he would tell me to move back in again. Once, he told me to seal off a door and to open a new one in another wall. I had to haul the bricks by foot from a distant kiln up to the monastery. We normally used a gas stove, but my master often sent me to the mountains to gather a special kind of firewood that he liked to brew his tea over. I would constantly be scolded for cutting the wood too small or too large. I had many experiences of this kind. In my practice it was much the same. When I asked him how to practice, he would tell me to meditate. But after a few days he would quote a famous master, saying, ‘You can’t make a mirror by polishing a brick, and you can’t become a Buddha by sitting.’ So he ordered me to do prostrations. Then, after several days, he would say ‘This is nothing but a dog eating shit off the ground. Read the sutras!’ After I read for a couple of weeks, he would scold me again, saying that the patriarchs thought the sutras good only for cleaning sores. He would say, ‘You’re smart. Write an essay.’ When I showed him an essay he would tear it up saying, ‘These are all stolen ideas.’ Then he would challenge me to use my own wisdom and say original things. All these arbitrary things were actually his way of training me. Whatever I did was wrong even if he had just told me to do it.”

Two years after becoming Master Dongchu’s disciple, the Ven. Sheng Yen went into solitary retreat at Chao Yuan Monastery (1961-1968). “Six years passed very quickly; I had little sense of time. I hadn’t accomplished what I had hoped to, but others persistently urged me to return, so I left the mountains. Returning to Taipei, I still felt inadequate. I thought that to teach Buddhadharma in this age, I needed a modern education and a degree.” So in 1969, on the strength of his works on Buddhism published during his retreat, he was admitted to Rissho University, Japan and earned a doctorate in Buddhist Literature in 1975. “During this period I visited various masters of Zen and esoteric Buddhism. I received the greatest influence from Bantetsugu Roshi, a disciple of Harada Roshi. I attended several winter-long retreats at his temple in Tohoku. Being in northern Japan, the temple had a very harsh environment. Moreover, the master seemed inclined to give me an especially hard time and constantly had his assistants beat me. Of the people there I had by far the most education, and he would say, ‘You scholars have a lot of selfish attachments and vexations. Your obstructions are heavy.’ ”

In the Linji lineage, Shifu is:

In the Caodong lineage, Shifu is: