This article by Chris Rowley is from the Shawangunk Journal from May 7, 2020 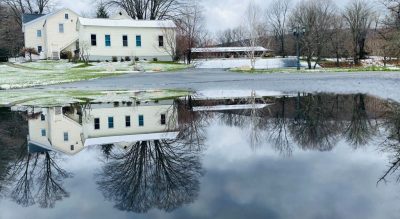 PINE BUSH – Dharma Drum, one of the largest international Buddhist organizations, has completed a $500,000 fundraising operation to purchase medical masks for hospitals and health workers. Our local Dharma Drum Retreat Center, on Quannacut Road in Pine Bush, participated in this effort that roped in Dharma centers all over North America.

This was part of the continent-wide Dharma Drum effort that began on March 30, and quickly raised $250,000 by April 3. The goal was $500,000; and, in fact, the effort was stopped when they reached $507,000. Twenty-four Buddhist centers joined in. By April 26, a million masks had been ordered from a trusted vendor in China. According to the Dharma Relief website, they have sent 596,000 masks to 173 hospitals across North America and Puerto Rico.

This is an example of the organizing power of international Buddhist organizations like that of Dharma Drum. Begun by “Chan” Master Sheng Yen (1930-2009) Dharma Drum Mountain is a network of monasteries and teaching centers for “Chan,” the Chinese word for the meditative Buddhist practice, often known here in America as Zen. Centered in Taiwan, Dharma Drum began with 120 acres of land on a mountain in the north of the island, about twenty miles outside Taipei, the capital city. It has grown in spectacular fashion in the 21st century. The creation of a new Chan lineage, the Dharma Drum Lineage, was the first new school of Chan Buddhism in the Chinese tradition for a thousand years.

Master Sheng Yen is known for this brief, but pithy sentence: “Kindness and compassion have no enemies; wisdom engenders no vexations.”