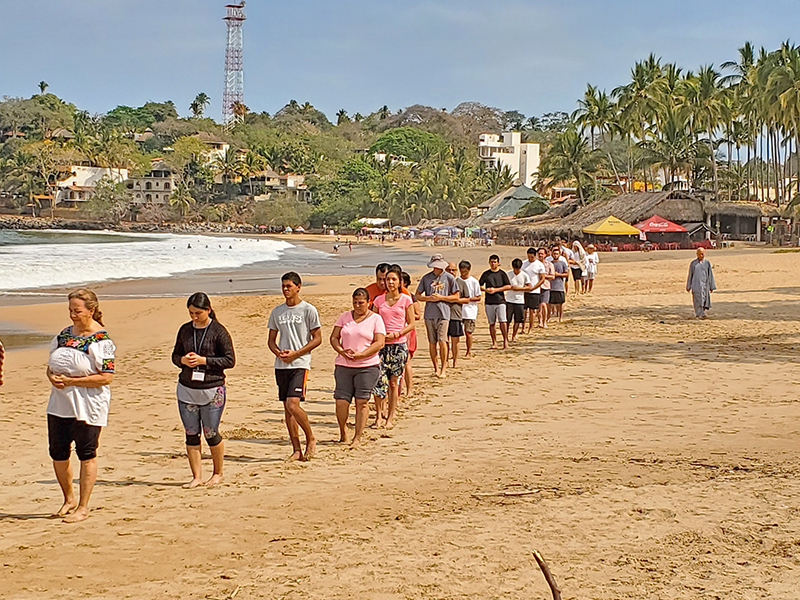 This year’s retreat in Mar De Jade, Mexico was in May. The weather was very nice, it was cool in the morning and night. Guo Yuan Fashi with Chang Xing Fashi as his assistant traveled together to see Dr. Laura Del Valle once again. They started out on May 8 from DDRC but the plane was delayed due to pouring rain in Fort Worth/Dallas; they had to stay overnight and then take an early flight to Puerto Vallarta, and then a drive to Mar De Jade — Dr. Laura’s holistic Retreat Center.

Dr. Laura had arranged a one-day meditation workshop on May 10, for thirty-four students at Tao De Jade, a trade and arts school that supports local youth who have dropped out of middle and high school because of economic hardship. In the beginning, the students weren’t sure what meditation was about, but gradually they caught on. In the end five courageous students signed up to attend the seven-day retreat that followed at Mar de Jade. 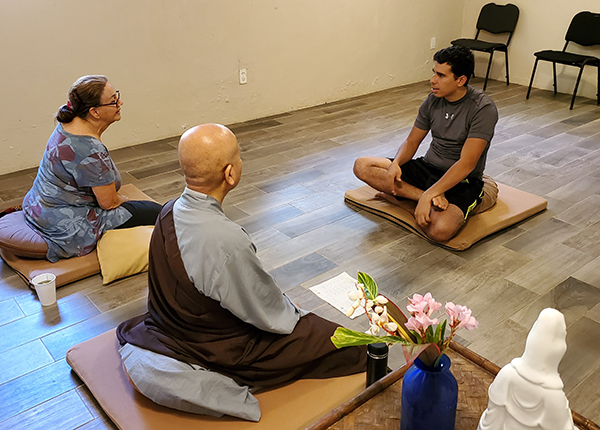 There were thirty-four participants in this seven-day retreat. Guo Yuan Fashi put more emphasis on stretching exercises in the beginning so participants wouldn’t feel so painful with many periods of sitting. This was a Silent illumination retreat and he took the opportunity to talk about the Heart Sutra. He explained the five skandhas, the twelve links of dependent origination, karma, cause-and-effect, and causes and conditions. Participants raised many questions because these concepts were quite new to them. The retreat moved on with sitting periods, self-massage, work practice, indoor and outdoor walking meditation, also walking meditation on the beach. In the interview period, participants asked questions concerning their life situations and the application of the teachings in daily life. For the entire retreat Dr. Laura was very helpful to translate into Spanish while Guo Yuan Fashi was talking in English.

Then came the night of sharing with tears and laughter. The students learned a lot from these seven days of silence and it inspired them to move on in a very positive way. The last morning ended with fifteen participants taking refuge in the Three Jewels. Finally Guo Yuan Fashi shared sound meditation with singing bowls; the retreat ended in Dharma joy and meditation bliss.