Excerpts from Retreat Reports. Originally published in the Fall 1999 issue of the Chan Magazine. The participants in this retreat came from over a dozen different countries and a wide range of experience, from first-time retreatants to those who lost count of their retreats long ago. What follows are excerpts from the reports of a dozen different practitioners-men and women, beginners and veterans–about their retreat experiences in 1998. 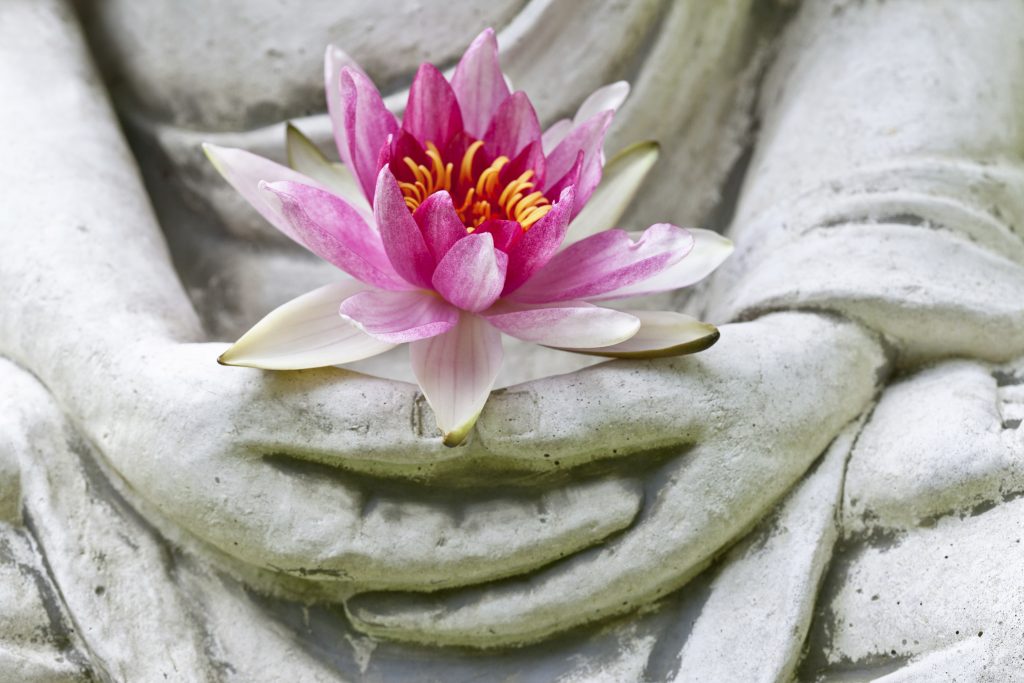 I spent the first day in the dark; mostly I remember darkness, my eyes closing, the light dimming, my mind dimming with it, sinking into a warm murk that even wandering thought could barely break through. During the day I struggled, but by evening I didn’t even want to practice well, I just wanted to sleep…

Weren’t my wandering thoughts just the discontinuous soundtrack of my vexations?

When I came to the retreat I was very wired, moving in my quick Western speed. I didn’t even know how frantically I did things until I experienced my behavior during work periods. I took on the dishwashing chore like a tornado, causing vexations to my co-workers in trying to keep up with the speed. How do I know this? We didn’t talk verbally, but we certainly talked to each other in silence. Fortunately I realized this about myself and slowed down, and soon my motion was more harmonious with the others. Also, this retreat I didn’t try to beat the line, to be first to the bathroom and out the door. I learned, mainly from the example of others, how to wait in line, be patient, and allow the other to go ahead. I was very happy in this new state of being…

The first four days of the retreat I was struggling with sleepiness, pain, and irritation. At times I thought I must be crazy for putting myself through this experience. I was at times irritated, angry, bored, and scared. However, instead of analyzing my feelings, with the help of Shifu’s (Master Sheng Yen’s) Dharma talks I determinedly stuck to the method. I didn’t seem to be getting anywhere until the fourth day, when we were led on a walk and meditation by the lake. As I lifted my eyes and gazed out over the lake, resting them gently on the water, trees, and sky, something shifted in me. When we returned to the Chan Hall and I took my seat I remembered what Shifu had said about relaxing the eyes and facial muscles. For the remainder of the retreat I regularly checked my eyes and facial muscles, and to my surprise I often found they were tense! I consciously made the effort to relax them. I did this over and over again in meditation. I also checked my lower back, abdomen, and shoulders. They often were also tense! I certainly would never have realized my tension, especially in my eyes and face, if Shifu had not pointed this out in his talks…

…On the second day, and only on that day, there were just a few moments with no pain whatsoever. My mind had relaxed considerably, my breathing had slowed down, the “I” thought had lost its tight grip, and all the pain simply disappeared. I just sat then, counted my breaths, and felt comfortable, yet I was fully aware of myself sitting and of my surroundings. Another day, during Direct Contemplation, I discovered that the instant I was fully aware and in the moment, feelings of desire in general, but also specifically for the object contemplated, had vanished. If I do not label, I do not desire….

…In the beginning my thoughts were long and sticky, coming as distinct opinions about the place, people, etc. I wanted to do things when I planned them (like taking a shower). It wasn’t always possible at exactly that moment. Although it wasn’t difficult to avoid the irritation, I realized how easily I can give in to vexations, just out of habit and laziness. After a few days I was able to experience “just waiting” under the door of the bathroom (a small experience of cessation of the negative state of mind). I gradually started to experience longer breaks in the stream of thoughts. On the fourth day I noticed changes in the texture of thoughts: some of them became light and it was possible to “blow them away” with the awareness of breath; others were like bubbles, and I was able to notice them in the state of formation. On the fifth day my method of practice changed. Until that time I was following the breath. During one period my breathing became slow and almost unrecognizable. I stopped distinguishing between the in and out breaths. There were no thoughts except the question “Where am I?” and the subsequent thought “I’m going to stay where I am without looking for the breath.” I became aware of my body and the environment, without differentiating any of its aspects. Peaceful, quiet, bright…

…The geese flying overhead at regular intervals on their migration south seemed an apt metaphor for this process: honk, honk; honk, honk; silence. Weren’t my wandering thoughts just the discontinuous soundtrack of my vexations? I felt as distant from them at times as from the geese flying overhead; these thoughts came, honked, and went. Why had I ever given them such importance? Honk, honk; honk, honk; weren’t they just a form of noise pollution of the mind? They were mine only if I insisted on possessing them. The geese were not mine any more than my migrating thoughts. Soundless moments stretched into hours….

…I do not know why my body was suddenly shaken by sobbing on the fourth or fifth day of the retreat. I felt the tears gathering, but there was no reason for them. I was not remembering something sad. There was no upsurge of painful feelings from past injury or loss. I had been silently counting my breaths as usual, and the few thoughts passing through my mind were weak and fleeting. Then the body began to weep. Tears streamed down my face and the stomach muscles convulsed as if a tragedy had occurred. And yet my spine remained erect and motionless, and the peaceful counting continued without change….

…My mind was calm, but the huatou was more like a mantra….I could not give rise to the doubt….Shifu discussed the Silent Illumination method….I decided to try it. The first sitting with Silent Illumination was very refreshing. It worked quite well: my mind was quiet and concentrated, feeling my body and the space of the room, the light at that point of the day, the sound of the birds and the roar of the waterfall at the mouth of the lake. I was not thinking about these things, just taking them in. The next period I tried again. It seemed to work for a little while, but then, suddenly, and with the conviction of a jealous lover, the huatou method returned. And not hypnotic chanting of the words, but asking once and waiting for response. And not empty waiting, a waiting with a heightened sense of anticipation. I’ve experienced the anticipation before, but this was different. I was much calmer. I wasn’t falling into my usual traps, such as congratulating myself on how well I was doing, or expending too much energy in the form of a tense body, or denying the authenticity of what I was feeling. These things did not matter….

…I went to my interview with Shifu carrying a concept that came without effort, an hour or so before. The Great Vow to master limitless approaches to Dharma, I realized, is none other than the act of true huatou practice.

In the interview my mind was focused on this little gem. I mentioned my observation. Shifu said, smiling, “That’s a vow, not a huatou.”

I began to explain; I mentioned something about phenomena.

He asked, “What is phenomena?”

I gave a dictionary style clarification of the word, hoping to help him with translation. Now, after all the interviews I’ve had with him over the years, and my awareness that he really does have a sophisticated English vocabulary… I sometimes wonder at my mental density in always thinking he needs a translation.
He then said, still with an amused smile on his face, “Thinking makes you stupid.” I remember my first reaction being one of hurt. After all, I was rather pleased with this idea…. I craved a congratulatory pat on the back.

Later, after the interview, another small insight came to me. “Is this stupid?” I asked myself. I didn’t make any effort to have this insight, it just appeared. “One could call this a thought, but I fail to see the stupidity in it. Yet isn’t it a wonderfully interesting conceptual loop, ‘Thinking makes you stupid’? Stupidity is defined by thinking, and thinking defines stupidity. Fascinating.”

It was at this point that I suddenly stopped and said to myself, “What the hell are you doing? Your practice is not ‘Thinking makes you stupid!’ You’re supposed to be working on your huatou!”

So there I was. Thinking made me stupid.

…Actually the most interesting things happen after retreats. This time I experienced stunning clarity of certain fragments of urban landscape…These houses were HOUSES and nothing else existed at that very moment…Their existence was breathtaking. They were just as they were. Impossible to comment upon. “Thusness” as strong as a boxer’s blow. And I did not look at any especially grand buildings….

…Two times Shifu pointed out to me unpleasant smells in his washroom that I cleaned. One was in the curtain. The other was in the little cupboard under the sink. Bad smell, he said. I let him smell the rag, the soap can, and the sponge, to determine where it came from. It was comic. Then I had to clean them very well and put them near the window so the smell would disperse in the wide free body of air outside.

It took some hard time, in the months after the retreat, and a bad experience, for me to come to terms with what he meant.

When I was in the retreat I did not feel that I was changing. Yes, I was becoming more calm at last, and I refreshed the knowledge of the direction in which my karma is taking me.

But it was only when I found myself in the subway, sitting among the bodies of people going to work, all of them tired, all of them tense, after working at making themselves presentable according to the accustomed ways, and there was not even one face or body that was not tense, that had not some amount of despair, or hanging on to some fleeting hope, it was only then that I knew that I was somewhere else.

Just one step outside the Chan Center made me meet the big world of ours, in which everything moves with no hope.

…As we filed out of the Chan Hall, the retreat just ended, Shifu asked after my wife. “What is the first thing you will say to her?” he asked me. How much I love her, I thought, but I said, “I will give her your regards.” “Your GRATITUDE!” he scolded, his eyes twinkling. I had been off retreat for five minutes and had already abandoned Buddhism completely.